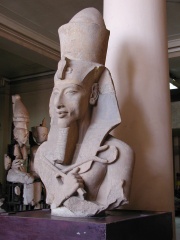 Akhenaten (pronounced ), also spelled Echnaton, Akhenaton, (Ancient Egyptian: ꜣḫ-n-jtn ʾŪḫə-nə-yātəy, pronounced [ˈʔuːχəʔ nə ˈjaːtəj], meaning "Effective for the Aten"), was an ancient Egyptian pharaoh reigning c. 1353–1336 or 1351–1334 BC, the tenth ruler of the Eighteenth Dynasty. Before the fifth year of his reign, he was known as Amenhotep IV (Ancient Egyptian: jmn-ḥtp, meaning "Amun is satisfied", Hellenized as Amenophis IV). As a pharaoh, Akhenaten is noted for abandoning Egypt's traditional polytheism and introducing Atenism, or worship centered around Aten. Read more on Wikipedia

Akhenaten is most famous for being the first monotheistic ruler of Egypt. He was also the father of Tutankhamun.

Page views of Akhenatens by language

Among politicians, Akhenaten ranks 42 out of 15,577. Before him are Charles V, Holy Roman Emperor, Justinian I, Richard III of England, Umar, Selim II, and Franz Joseph I of Austria. After him are Pericles, Maria Theresa, Ulysses S. Grant, Nero, Leon Trotsky, and Peter the Great.