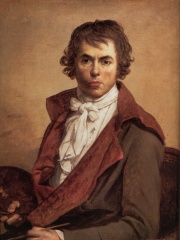 Jacques-Louis David (French: [ʒaklwi david]; 30 August 1748 – 29 December 1825) was a French painter in the Neoclassical style, considered to be the preeminent painter of the era. In the 1780s, his cerebral brand of history painting marked a change in taste away from Rococo frivolity toward classical austerity and severity and heightened feeling, harmonizing with the moral climate of the final years of the Ancien Régime. David later became an active supporter of the French Revolution and friend of Maximilien Robespierre (1758–1794), and was effectively a dictator of the arts under the French Republic. Read more on Wikipedia

Jacques-Louis David was a French painter and sculptor in the Neoclassical style. He was a leading artist in the early 19th century, and is best known for his large historical paintings, including Oath of the Horatii, Death of Socrates, and The Sabine Women.