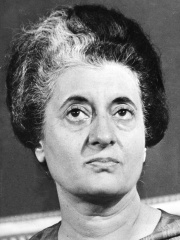 Indira Priyadarshini Gandhi (Hindi: [ˈɪndɪraː ˈɡaːndʱiː] (listen); née Nehru; 19 November 1917 – 31 October 1984) was an Indian politician and a central figure of the Indian National Congress. She was the first and, to date, the only female Prime Minister of India. Indira Gandhi was the daughter of Jawaharlal Nehru, the first prime minister of India. Read more on Wikipedia

Since 2007, the English Wikipedia page of Indira Gandhi has received more than 11,916,486 page views. Her biography is available in 120 different languages on Wikipedia making her the 322nd most popular politician.

Among politicians, Indira Gandhi ranks 319 out of 14,801. Before her are Salman of Saudi Arabia, Edward III of England, Henry IV, Holy Roman Emperor, Elagabalus, Dido, and Djoser. After her are Lyndon B. Johnson, Alcibiades, Constantine XI Palaiologos, Mustafa II, Leopold I, Holy Roman Emperor, and Abdul Hamid I.