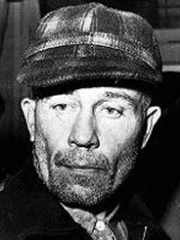 Edward Theodore Gein (; August 27, 1906 – July 26, 1984), also known as the Butcher of Plainfield or the Plainfield Ghoul, was an American serial killer and body snatcher. Gein's crimes, committed around his hometown of Plainfield, Wisconsin, gathered widespread notoriety in 1957 after authorities discovered he had exhumed corpses from local graveyards and fashioned trophies and keepsakes from their bones and skin. Read more on Wikipedia

Since 2007, the English Wikipedia page of Ed Gein has received more than 16,529,710 page views. His biography is available in 37 different languages on Wikipedia. Ed Gein is the 13th most popular extremist (up from 14th in 2019), the 294th most popular biography from United States (down from 281st in 2019) and the 5th most popular American Extremist.

Ed Gein is most famous for his crimes. He was a serial killer and necrophile. He would often dig up the bodies of recently buried women and use their skin to make masks, belts, and other objects.

Among extremists, Ed Gein ranks 13 out of 205. Before him are Ted Bundy, Herostratus, Lee Harvey Oswald, Gilles de Rais, Man in the Iron Mask, and Andrei Chikatilo. After him are Ramón Mercader, Ulrike Meinhof, Ted Kaczynski, Zodiac Killer, Albert Fish, and Abdullah Öcalan.