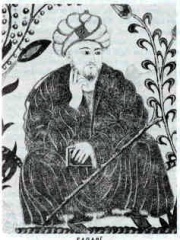 Abu Nasr Al-Farabi (; Persian: ابو نصر محمد بن محمد فارابی‎ Abū Naṣr Muḥammad ibn Muḥammad al Fārābī; known in the West as Alpharabius; c. 872 – between 14 December, 950 and 12 January, 951) was a renowned early Islamic philosopher and jurist who wrote in the fields of political philosophy, metaphysics, ethics and logic. He was also a scientist, cosmologist, mathematician and music theorist.In Islamic philosophical tradition he was often called "the Second Teacher", following Aristotle who was known as "the First Teacher". Read more on Wikipedia

Al-Farabi is most famous for his work on the philosophy of Plato and Aristotle.

Page views of Al-Farabis by language

Among philosophers, Al-Farabi ranks 45 out of 1,089. Before him are Michel de Montaigne, Ludwig Wittgenstein, Maria Montessori, Parmenides, Origen, and Thomas More. After him are Michel Foucault, Karl Popper, Protagoras, Hannah Arendt, Henri Bergson, and Plotinus.

Among PHILOSOPHERS In Kazakhstan