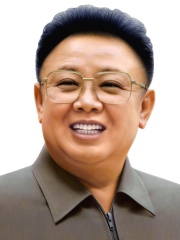 Kim Jong-il (; Korean: 김정일; Korean pronunciation: [kim.dzɔŋ.il]; born Yuri Irsenovich Kim (Russian: Юрий Ирсенович Ким); 16 February 1941 – 17 December 2011) was a North Korean politician who was the second supreme leader of North Korea from 1994 to 2011. He led North Korea from the 1994 death of his father Kim Il-sung, the first Supreme Leader, until his own death in 2011, when he was succeeded by his son, Kim Jong-un. In the early 1980s, Kim had become the heir apparent for the leadership of the Democratic People's Republic of Korea (DPRK) and assumed important posts in the party and army organs. Read more on Wikipedia

Among politicians, Kim Jong-il ranks 114 out of 15,710. Before him are George Washington, Isabella I of Castile, Pepin the Short, Murad III, Yasser Arafat, and Mark Antony. After him are Uthman, Harald Fairhair, Marcus Licinius Crassus, Angela Merkel, Joseph II, Holy Roman Emperor, and Otto I, Holy Roman Emperor.