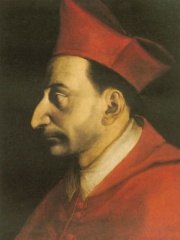 Charles Borromeo (Italian: Carlo Borromeo; Latin: Carolus Borromeus; 2 October 1538 – 3 November 1584) was the Archbishop of Milan from 1564 to 1584 and a cardinal of the Catholic Church. He was a leading figure of the Counter-Reformation combat against the Protestant Reformation together with Ignatius of Loyola and Philip Neri. In that role he was responsible for significant reforms in the Catholic Church, including the founding of seminaries for the education of priests. Read more on Wikipedia

Charles Borromeo was a Roman Catholic cardinal who is most famous for his work in reforming the clergy and for his patronage of the arts.

Among religious figures, Charles Borromeo ranks 252 out of 2,272. Before him are Vitus, Pope Martin IV, Pope Innocent II, Pope Celestine I, Photios I of Constantinople, and Muslim ibn al-Hajjaj. After him are Pope Liberius, Vincent de Paul, Belshazzar, Pope Adeodatus I, Sabbatai Zevi, and Pope Anicetus.

Among people born in 1538, Charles Borromeo ranks 1. After him are Christopher Clavius, Caesar Baronius, Guglielmo Gonzaga, Duke of Mantua, Maeda Toshiie, Giovanni Battista Guarini, Louis of Nassau, Turibius of Mogrovejo, Hōjō Ujimasa, Infanta Maria of Guimarães, and Ashikaga Yoshihide. Among people deceased in 1584, Charles Borromeo ranks 3. Before him are Ivan the Terrible and William the Silent. After him are Francis, Duke of Anjou, Yi I, Bernal Díaz del Castillo, Jan Kochanowski, Balthasar Gérard, Marcantonio Colonna, Mikołaj "the Red" Radziwiłł, and Pieter Pourbus.