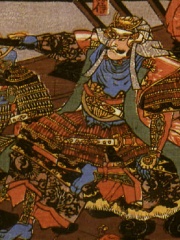 Uesugi Kenshin (上杉 謙信, February 18, 1530 – April 19, 1578) was a daimyō who was born as Nagao Kagetora of the Nagao clan, and after adoption into the Uesugi clan, ruled Echigo Province in the Sengoku period of Japan. He was one of the most powerful daimyōs of the Sengoku period. Read more on Wikipedia

Uesugi Kenshin was a samurai who ruled over Echigo and Shinano provinces in Japan during the Sengoku period. He is most famous for his role in the Battle of Kawanakajima in 1561, where he defeated Takeda Shingen, the most powerful warrior of the Takeda clan.

Among politicians, Uesugi Kenshin ranks 1,569 out of 15,710. Before him are Marie Walewska, Chester A. Arthur, Porfirio Díaz, Mahfiruz Hatun, Bill de Blasio, and Olof Skötkonung. After him are Albert Lebrun, Amr ibn Hishām, John II of Aragon, Getúlio Vargas, Elizabeth of Portugal, and Edward, King of Portugal.

Among people born in 1530, Uesugi Kenshin ranks 5. Before him are Ivan the Terrible, Jean Bodin, Étienne de La Boétie, and Louis, Prince of Condé. After him are Jean Nicot, Anastasia Romanovna, Yasuke, Ruy López de Segura, Jan Kochanowski, Christopher Báthory, and Johann Wilhelm, Duke of Saxe-Weimar. Among people deceased in 1578, Uesugi Kenshin ranks 5. Before him are Mihrimah Sultan, John of Austria, Sebastian of Portugal, and Catherine of Austria, Queen of Portugal. After him are James Hepburn, 4th Earl of Bothwell, Joanna of Austria, Grand Duchess of Tuscany, Pierre Lescot, Sebastiano Venier, Pietro Andrea Mattioli, Piali Pasha, and Giovanni Battista Moroni.