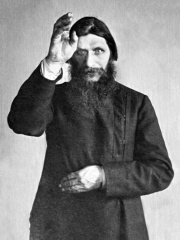 Grigori Yefimovich Rasputin (; Russian: Григорий Ефимович Распутин [ɡrʲɪˈɡorʲɪj jɪˈfʲiməvʲɪtɕ rɐˈsputʲɪn]; 21 January [O.S. 9 January] 1869 – 30 December [O.S. 17 December] 1916) was a Russian mystic and self-proclaimed holy man. He is best-known for having befriended the royal family of Nicholas II, the last Emperor of Russia, through whom he gained considerable influence in the later years of the Russian Empire. Rasputin was born to a family of peasants in the Siberian village of Pokrovskoye, located within Tyumensky Uyezd in Tobolsk Governorate (present-day Yarkovsky District in Tyumen Oblast). Read more on Wikipedia

Grigori Rasputin was a Russian mystic who was said to have healing powers. He was also said to have been a sexual predator.

Among OCCULTISTS In Russia

Among occultists born in Russia, Grigori Rasputin ranks 1. After him are Nina Kulagina (1926).