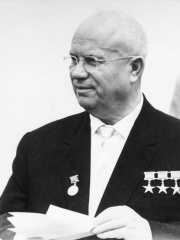 Nikita Sergeyevich Khrushchev (15 April [O.S. 3 April] 1894 – 11 September 1971) was a Soviet politician who served as the First Secretary of the Communist Party of the Soviet Union from 1953 to 1964 and as chairman of the country's Council of Ministers from 1958 to 1964. During his rule, Khrushchev stunned the communist world with his denunciation of Stalin's crimes and began de-Stalinization. He sponsored the early Soviet space program, and enactment of relatively liberal reforms in domestic policy. Read more on Wikipedia

Nikita Khrushchev was the Soviet Premier from 1953 to 1964. He is most famous for his speech at the 20th Congress of the Communist Party of the Soviet Union in 1956, where he denounced the cult of personality of Joseph Stalin.

Among politicians, Nikita Khrushchev ranks 72 out of 15,710. Before him are Lorenzo de' Medici, Francisco Franco, Ronald Reagan, Ivan the Terrible, Richard I of England, and Nicolae Ceaușescu. After him are Frederick I, Holy Roman Emperor, Selim II, Napoleon III, Franklin D. Roosevelt, Theodosius I, and Mary I of England.