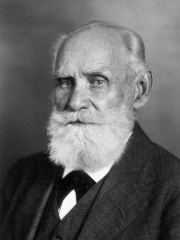 Ivan Petrovich Pavlov (Russian: Ива́н Петро́вич Па́влов, IPA: [ɪˈvan pʲɪˈtrovʲɪtɕ ˈpavləf] (listen); 26 September [O.S. 14 September] 1849 – 27 February 1936) was a Soviet and Russian physiologist known primarily for his work in classical conditioning. From his childhood days, Pavlov demonstrated intellectual curiosity along with an unusual energy which he referred to as "the instinct for research". Inspired by the progressive ideas which Dmitry Pisarev, a Russian literary critic of the 1860s, and Ivan Sechenov, the father of Russian physiology, were spreading, Pavlov abandoned his religious career and devoted his life to science. Read more on Wikipedia

Ivan Pavlov was most famous for his work in classical conditioning. He found that if he rang a bell before feeding his dogs, the dogs would start to salivate just at the sound of the bell.

Among BIOLOGISTS In Russia