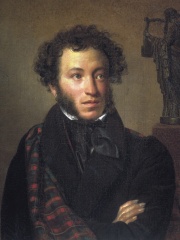 Alexander Sergeyevich Pushkin (English: ; Russian: Александр Сергеевич Пушкин, tr. Aleksandr Sergeyevich Pushkin, IPA: [ɐlʲɪkˈsandr sʲɪrˈɡʲe(j)ɪvʲɪtɕ ˈpuʂkʲɪn] (listen); 6 June [O.S. 26 May] 1799 – 10 February [O.S. 29 January] 1837) was a Russian poet, playwright, and novelist of the Romantic era. He is considered by many to be the greatest Russian poet and the founder of modern Russian literature.Pushkin was born into the Russian nobility in Moscow. Read more on Wikipedia

Alexander Pushkin is most famous for his poetry. He is considered to be the father of Russian literature.

Among writers, Alexander Pushkin ranks 23 out of 5,794. Before him are Sophocles, Virgil, Petrarch, Jean-Paul Sartre, Aesop, and Anton Chekhov. After him are Giovanni Boccaccio, Agatha Christie, Ovid, Antoine de Saint-Exupéry, Ernest Hemingway, and Charles Dickens.