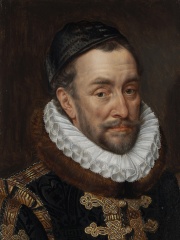 William the Silent (24 April 1533 – 10 July 1584), also known as William the Taciturn (translated from Dutch: Willem de Zwijger), or, more commonly in the Netherlands, William of Orange (Dutch: Willem van Oranje), was the main leader of the Dutch Revolt against the Spanish Habsburgs that set off the Eighty Years' War (1568–1648) and resulted in the formal independence of the United Provinces in 1648. Born into the House of Nassau, he became Prince of Orange in 1544 and is thereby the founder of the Orange-Nassau branch and the ancestor of the monarchy of the Netherlands. Read more on Wikipedia

William the Silent is most famous for being the Prince of Orange and leading the Dutch revolt against Spain.

Page views of William the Silents by language

Among politicians, William the Silent ranks 274 out of 15,577. Before him are Nursultan Nazarbayev, Philip IV of Spain, Mahmud II, Charles the Bald, Edward III of England, and Elizabeth of Russia. After him are Silvio Berlusconi, Harald Fairhair, Georges Danton, Ariel Sharon, Edward II of England, and Ahmed II.

Among people born in 1533, William the Silent ranks 3. Before him are Elizabeth I of England and Michel de Montaigne. After him are Stephen Báthory, Eric XIV of Sweden, Ismail II, Giacomo della Porta, Andrea Gabrieli, Catherine of Austria, Queen of Poland, Alfonso II d'Este, Duke of Ferrara, Hieronymus Fabricius, and Abdullah Khan II. Among people deceased in 1584, William the Silent ranks 2. Before him is Ivan the Terrible. After him are Charles Borromeo, Francis, Duke of Anjou, Yi I, Bernal Díaz del Castillo, Balthasar Gérard, Jan Kochanowski, Marcantonio Colonna, Mikołaj "the Red" Radziwiłł, and Pieter Pourbus.