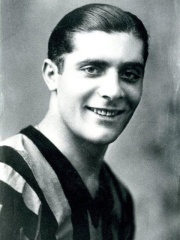 Giuseppe "Peppino" Meazza (Italian pronunciation: [dʒuˈzɛppe meˈattsa]; 23 August 1910 – 21 August 1979), also known as il Balilla, was an Italian football manager and player. Throughout his career, he played mainly for Inter Milan in the 1930s, scoring 242 goals in 365 games for the club, and winning three Serie A titles, as well as the Coppa Italia; he later also played for local rivals Milan, as well as Turin rivals Juventus, in addition to his spells with Varese and Atalanta. At international level, he led Italy to win two consecutive World Cups: in 1934 on home soil, and in 1938 as captain; he was named to the All-star Team and won the Golden Ball Award at the 1934 World Cup, as the tournament's best player. Read more on Wikipedia

Giuseppe Meazza was an Italian footballer who played as a forward. He is most famous for being the first player to score more than 300 goals in Italy's top division.