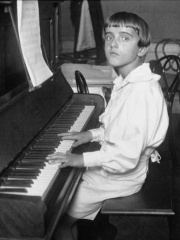 Giovanni Rota Rinaldi (Italian: [dʒoˈvanni ˈrɔːta riˈnaldi]; 3 December 1911 – 10 April 1979), better known as Nino Rota ([niːno]), was an Italian composer, pianist, conductor and academic who is best known for his film scores, notably for the films of Federico Fellini and Luchino Visconti. He also composed the music for two of Franco Zeffirelli's Shakespeare films, and for the first two films of Francis Ford Coppola's Godfather trilogy, earning the Academy Award for Best Original Score for The Godfather Part II (1974) which was later revoked after a determination was made that the score was not original.During his long career, Rota was an extraordinarily prolific composer, especially of music for the cinema. He wrote more than 150 scores for Italian and international productions from the 1930s until his death in 1979 — an average of three scores each year over a 46-year period, and in his most productive period from the late 1940s to the mid-1950s he wrote as many as ten scores every year, and sometimes more, with a remarkable thirteen film scores to his credit in 1954. Read more on Wikipedia

Nino Rota is most famous for his work with Federico Fellini, composing the music for the films 8 1/2, Amarcord, and La Dolce Vita.