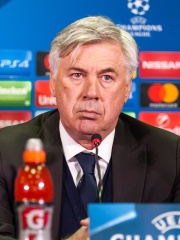 Carlo Ancelotti , (born 10 June 1959) is an Italian professional football manager and former player who is the manager of La Liga club Real Madrid. He is regarded as one of the greatest and most successful managers in the world.Ancelotti is one of only three managers to have won the UEFA Champions League three times (twice with AC Milan and once with Real Madrid), and one of only two to have managed teams in four finals. He has won the FIFA Club World Cup twice, managing Milan and Real Madrid. Read more on Wikipedia

Carlo Ancelotti is most famous for being the manager of the Italian national team in 2006 and the English Premier League club Chelsea from 2009 to 2011.