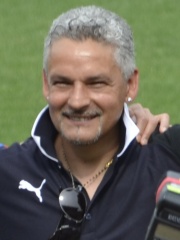 Roberto Baggio (Italian pronunciation: [roˈbɛrto ˈbaddʒo]; born 18 February 1967) is an Italian former professional footballer who mainly played as a second striker, or as an attacking midfielder, although he was capable of playing in several offensive positions. He is the former president of the technical sector of the Italian Football Federation. A technically gifted creative playmaker and set piece specialist, renowned for his curling free-kicks, dribbling skills, and goalscoring, Baggio is widely regarded as one of the greatest players of all time. Read more on Wikipedia

Roberto Baggio is most famous for being a professional footballer. He played for Italian club Juventus and the Italian national team, and is considered one of the best players of all time.

Among people born in 1967, Roberto Baggio ranks 6. Before him are Vin Diesel, Jason Statham, Kurt Cobain, Nicole Kidman, and Julia Roberts. After him are Mikheil Saakashvili, Jürgen Klopp, Kazuyoshi Miura, David Guetta, Willem-Alexander of the Netherlands, and Kane.