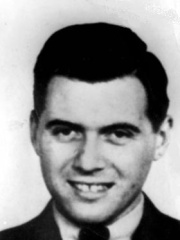 Josef Rudolf Mengele ([ˈjoːzɛf ˈmɛŋlə] (listen); 16 March 1911 – 7 February 1979), also known as the Angel of Death (German: Todesengel), was a German Schutzstaffel (SS) officer and physician during World War II. He performed deadly experiments on prisoners at the Auschwitz II (Birkenau) concentration camp, where he was a member of the team of doctors who selected victims to be killed in the gas chambers, and was one of the doctors who administered the gas. With Red Army troops sweeping through German-occupied Poland, Mengele was transferred 280 kilometres (170 mi) from Auschwitz to the Gross-Rosen concentration camp on 17 January 1945, ten days before the arrival of the Soviet forces at Auschwitz. Before the war, Mengele received doctorates in anthropology and medicine, and began a career as a researcher. Read more on Wikipedia

Josef Mengele was a German SS officer and physician in Auschwitz concentration camp during World War II. He is most famous for performing human experiments on prisoners and for his role in the selection of prisoners to be sent to the gas chambers.

Among physicians, Josef Mengele ranks 6 out of 502. Before him are Hippocrates, Florence Nightingale, Galen, Paracelsus, and Robert Koch. After him are Edward Jenner, Basil of Caesarea, Andreas Vesalius, Muhammad ibn Zakariya al-Razi, L. L. Zamenhof, and Albert Schweitzer.