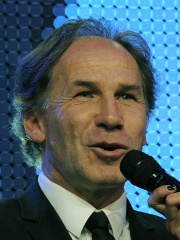 Franchino Baresi (Italian pronunciation: [ˈfraŋko baˈreːzi; -eːsi]; born 8 May 1960) is an Italian football youth team coach and a former player and manager. He mainly played as a sweeper or as a central defender, and spent his entire 20-year career with Serie A club AC Milan, captaining the club for 15 seasons. He is considered one of the greatest defenders of all-time and was ranked 19th in World Soccer magazine's list of the 100 greatest players of the 20th century. Read more on Wikipedia

Franco Baresi is most famous for his role as a defender in the Italian national team.