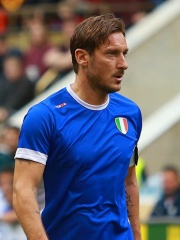 Francesco Totti (Italian pronunciation: [franˈtʃesko ˈtɔtti]; born 27 September 1976) is an Italian former professional footballer who played solely for Roma and the Italy national team. He is often referred to as Er Bimbo de Oro (The Golden Boy), L'Ottavo Re di Roma (The Eighth King of Rome), Er Pupone (The Big Baby), and Il Capitano (The Captain) by the Italian sports media. A creative offensive playmaker who could play as an attacking midfielder and as a forward (second striker, lone striker, or winger), renowned for his vision, technique, and goalscoring ability, Totti is considered to be one of the greatest Italian players of all time, one of the best players of his generation, and Roma's greatest player ever.Totti spent his entire career at Roma, winning a Serie A title, two Coppa Italia titles, and two Supercoppa Italiana titles. Read more on Wikipedia

Francesco Totti is most famous for his time with AS Roma and the Italian National Team. He is a retired Italian footballer who played as a striker and is the country's all-time top scorer.