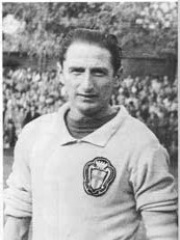 Silvio Piola (Italian pronunciation: [ˈsilvjo ˈpjɔːla]; 29 September 1913 – 4 October 1996) was an Italian footballer who played as a striker. He is known as a highly prominent figure in the history of Italian football due to several records he set, and he is regarded as one of the greatest strikers of his generation, as well as one of the best Italian players of all time. Piola was part of the squad that won the 1933-35 Central European International Cup & the squad that won the 1938 FIFA World Cup with Italy, scoring two goals in the final, ending the tournament as the second best player and the second highest scorer.Piola is third in the all-time goalscoring records of the Italian national team. Read more on Wikipedia

Silvio Piola is most famous for being the all-time leading goalscorer in the Italian league, and for scoring a goal in the 1934 World Cup Final.