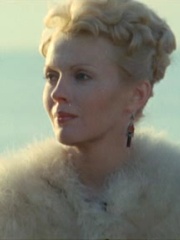 Jean Dorothy Seberg (; French: [ʒin sebɛʁɡ]; November 13, 1938 – August 30, 1979) was an American actress who lived half her life in France. Her performance in Jean-Luc Godard's 1960 film Breathless immortalized her as an icon of French New Wave cinema.She appeared in 34 films in Hollywood and in Europe, including Saint Joan, Bonjour Tristesse, Lilith, The Mouse That Roared, Moment to Moment, A Fine Madness, Paint Your Wagon, Airport, Macho Callahan, and Gang War in Naples. She was also one of the best-known targets of the FBI COINTELPRO project. Her targeting was in retaliation for her support of the Black Panther Party and was a smear directly ordered by J. Read more on Wikipedia

Since 2007, the English Wikipedia page of Jean Seberg has received more than 3,315,439 page views. Her biography is available in 30 different languages on Wikipedia making her the 352nd most popular actor.