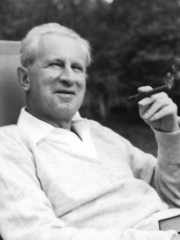 Herbert Marcuse (; German: [maɐ̯ˈkuːzə]; July 19, 1898 – July 29, 1979) was a German-American philosopher, sociologist, and political theorist, associated with the Frankfurt School of Critical Theory. Born in Berlin, Marcuse studied at the Humboldt University of Berlin and then at Freiburg, where he received his PhD. He was a prominent figure in the Frankfurt-based Institute for Social Research – what later became known as the Frankfurt School. He was married to Sophie Wertheim (1924–1951), Inge Neumann (1955–1973), and Erica Sherover (1976–1979). Read more on Wikipedia

Since 2007, the English Wikipedia page of Herbert Marcuse has received more than 1,001,778 page views. His biography is available in 60 different languages on Wikipedia making him the 116th most popular philosopher.

Among philosophers, Herbert Marcuse ranks 114 out of 1,005. Before him are Ibn Taymiyyah, Bonaventure, Gorgias, Antisthenes, Charles Fourier, and Bodhidharma. After him are Hans-Georg Gadamer, Aristippus, George Gurdjieff, Emil Cioran, Oswald Spengler, and Ramon Llull.