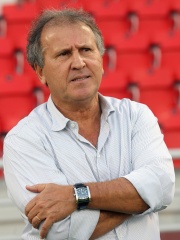 Arthur Antunes Coimbra (Portuguese pronunciation: [aʁˈtuʁ ɐ̃ˈtũnis koˈĩbɾɐ], born 3 March 1953), better known as Zico ([ˈziku]), is a Brazilian football coach and former player who played as an attacking midfielder. Often called the "White Pelé", he was a creative playmaker, with excellent technical skills, vision and an eye for goal, who is considered one of the most clinical finishers and best passers ever, as well as one of the greatest players of all time. One of the world's best players of the late 1970s and early 1980s, he is regarded as one of the best playmakers and free kick specialists in history, able to bend the ball in all directions. Read more on Wikipedia

Zico is most famous for being the leader of Block B, a Korean hip-hop group.