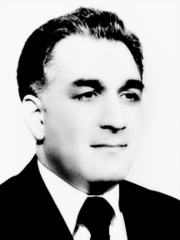 Hafizullah Amin (Pashto/Dari: حفيظ الله امين;‎ 1 August 1929 – 27 December 1979) was an Afghan communist revolutionary, politician and teacher. He organized the Saur Revolution of 1978 and co-founded the Democratic Republic of Afghanistan (DRA), ruling Afghanistan as General Secretary of the People's Democratic Party from September 1979 until his assassination in December 1979.Born in the town of Paghman in Kabul Province, Amin studied at Kabul University and started his career as a teacher before he twice went to the United States to study. During this time, Amin became attracted to Marxism and became involved in radical student movements at the University of Wisconsin. Read more on Wikipedia

Among politicians, Hafizullah Amin ranks 913 out of 15,577. Before him are Ptolemy V Epiphanes, Gojong of Korea, Julius Streicher, Helmut Schmidt, Andronikos II Palaiologos, and Fahd of Saudi Arabia. After him are Cambyses I, John Quincy Adams, Elisabeth of France, Muhammad XII of Granada, Ivan VI of Russia, and Béla Kun.