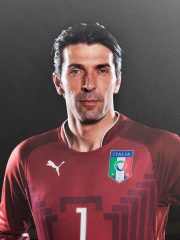 Gianluigi "Gigi" Buffon, (Italian pronunciation: [dʒanluˈiːdʒi bufˈfɔn, -ˈfon]; born 28 January 1978) is an Italian professional footballer who plays as a goalkeeper for Serie A club Juventus. He is widely regarded by players, pundits and managers as one of the greatest goalkeepers of all time, and, by many, as the greatest ever. Buffon holds the record for the longest streak without conceding a goal in Serie A history: over 12 league matches, he went unbeaten for 974 consecutive minutes during the 2015–16 season, achieving the most consecutive clean sheets (10) during that run. Read more on Wikipedia

Since 2007, the English Wikipedia page of Gianluigi Buffon has received more than 9,472,435 page views. His biography is available in 87 different languages on Wikipedia making him the 47th most popular soccer player.