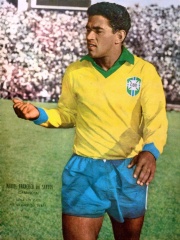 Manuel Francisco dos Santos (28 October 1933 – 20 January 1983), nicknamed Mané Garrincha, best known as simply Garrincha (Portuguese pronunciation: [ɡaˈʁĩʃɐ], "little bird"), was a Brazilian professional footballer who played as a right winger. He is widely regarded as one of the greatest players of all time, and by some, the greatest dribbler ever.Garrincha played a vital role in Brazil's 1958 and 1962 World Cup victories. In 1962, when Pelé got injured, Garrincha led Brazil to a World Cup victory with a dominating performance throughout the tournament. Read more on Wikipedia

Since 2007, the English Wikipedia page of Garrincha has received more than 2,017,544 page views. His biography is available in 70 different languages on Wikipedia (up from 68 in 2019). Garrincha is the 9th most popular soccer player (down from 4th in 2019), the 3rd most popular biography from Brazil (down from 2nd in 2019) and the 2nd most popular Brazilian Soccer Player.

Garrincha is most famous for being a Brazilian soccer player who played for the Brazil national team in the 1958 and 1962 World Cups.

Page views of Garrinchas by language