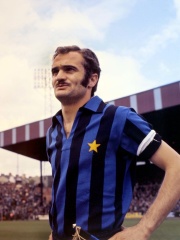 Alessandro "Sandro" Mazzola (Italian pronunciation: [ˈsandro matˈtsɔːla]; born 8 November 1942) is an Italian former professional footballer, who played as a forward or attacking midfielder for Internazionale and the Italy national team. He currently works as a football analyst and commentator on the Italian national television station RAI. He is widely regarded as one of the greatest Italian football players of all time, and as one of the best players of his generation, due to his speed, work-rate, creativity, technical skills and eye for goal; he placed second in the 1971 Ballon d'Or. Having spent his entire 17 season career with Inter, he holds the honour of being a one-club man. Read more on Wikipedia

Sandro Mazzola is most famous for scoring the winning goal in the 1970 World Cup Final.