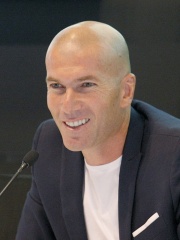 Zinedine Yazid Zidane (French pronunciation: ​[zinedin jazid zidan], Arabic: زين الدين يزيد زيدان‎; born 23 June 1972), popularly known as Zizou, is a French former professional football player who played as an attacking midfielder. He is the current manager of La Liga club Real Madrid and is one of the most successful managers in the world. Widely regarded as one of the greatest players of all time, Zidane was an elite playmaker renowned for his elegance, vision, passing, ball control, and technique. Read more on Wikipedia

Since 2007, the English Wikipedia page of Zinedine Zidane has received more than 13,997,617 page views. His biography is available in 102 different languages on Wikipedia making him the 13th most popular soccer player.