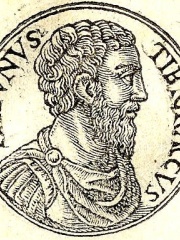 Tiberius Sempronius Gracchus (c. 163 BC–133 BC) was a Roman politician best known for his agrarian reform law entailing the transfer of land from the Roman state and wealthy landowners to poorer citizens. He had also served in the Roman army, fighting in the Third Punic War and in Spain. Against substantial opposition in the senate, his land reform bill was carried through during his term as tribune of the plebs in 133 BC. Read more on Wikipedia

Tiberius Gracchus was a Roman politician who is most famous for his land reform legislation.

Among politicians, Tiberius Gracchus ranks 392 out of 15,710. Before him are Raúl Castro, Mustafa II, José Mujica, Louis X of France, Javier Pérez de Cuéllar, and Willy Brandt. After him are Woodrow Wilson, Richard II of England, Toyotomi Hideyoshi, Theodoric the Great, Galerius, and Leopold I of Belgium.

Others Deceased in 133 BC