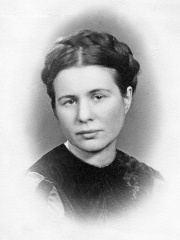 Irena Stanisława Sendler (née Krzyżanowska), also referred to as Irena Sendlerowa in Poland, nom de guerre Jolanta (15 February 1910 – 12 May 2008), was a Polish humanitarian, social worker, and nurse who served in the Polish Underground Resistance during World War II in German-occupied Warsaw. From October 1943 she was head of the children's section of Żegota, the Polish Council to Aid Jews (Polish: Rada Pomocy Żydom).In the 1930s, Sendler conducted her social work as one of the activists connected to the Free Polish University. From 1935 to October 1943, she worked for the Department of Social Welfare and Public Health of the City of Warsaw. Read more on Wikipedia

Irena Sendler was a Polish woman who saved 2,500 Jewish children from the Nazis by smuggling them out of the Warsaw Ghetto.

Among SOCIAL ACTIVISTS In Poland