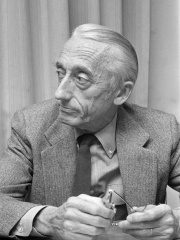 Jacques-Yves Cousteau, (, also UK: , French: [ʒak iv kusto]; 11 June 1910 – 25 June 1997) was a French naval officer, explorer, conservationist, filmmaker, innovator, scientist, photographer, author and researcher who studied the sea and all forms of life in water. He co-developed the Aqua-Lung, pioneered marine conservation and was a member of the Académie Française. Cousteau described his underwater world research in a series of books, perhaps the most successful being his first book, The Silent World: A Story of Undersea Discovery and Adventure, published in 1953. Read more on Wikipedia

Jacques Cousteau is most famous for his work in the field of marine biology and oceanography. He was a pioneer in underwater exploration, film-making, and environmental activism.

Among explorers, Jacques Cousteau ranks 19 out of 405. Before him are Francisco Pizarro, Prince Henry the Navigator, Jacques Cartier, Fridtjof Nansen, Erik the Red, and David Livingstone. After him are Xuanzang, Leif Erikson, Thor Heyerdahl, Abel Tasman, Vitus Bering, and Pedro Álvares Cabral.

Among EXPLORERS In France