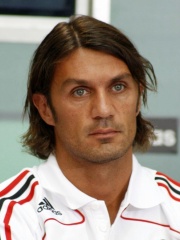 Paolo Cesare Maldini (Italian pronunciation: [ˈpaːolo malˈdiːni]; born 26 June 1968) is an Italian former professional footballer who played primarily as a left back and centre back for AC Milan and the Italy national team. He is widely regarded as one of the greatest defenders and players of all time. As the Milan and Italy captain for many years he was nicknamed "Il Capitano" ("The Captain"). Read more on Wikipedia

Paolo Maldini is most famous for his long career as a professional footballer with AC Milan and the Italian national team. He played as a left-back and spent all 25 seasons of his career at Milan, making 902 appearances and scoring 26 goals. He won 26 trophies with Milan, including five Serie A titles, five Supercoppa Italiana, five European Cup/Champions League titles, one UEFA Super Cup, two Intercontinental Cups, and one FIFA Club World Cup.

Among people born in 1968, Paolo Maldini ranks 4. Before him are Will Smith, Celine Dion, and Daniel Craig. After him are Felipe VI of Spain, Hugh Jackman, Mika Häkkinen, Naomi Watts, Gillian Anderson, Kolinda Grabar-Kitarović, Didier Deschamps, and Marine Le Pen.