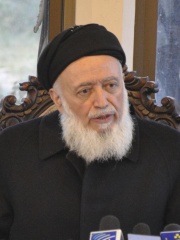 Burhānuddīn Rabbānī (Persian: برهان‌الدین ربانی; 20 September 1940 – 20 September 2011) was an Afghan politician and teacher who served as President of Afghanistan from 1992 to 1996 (in exile from 1996 to 2001). Born in the Badakhshan Province, Rabbani studied at Kabul University and worked there as a professor of Islamic theology. He formed the Jamiat-e Islami (Islamic Society) at the university which attracted then-students Gulbuddin Hekmatyar and Ahmad Shah Massoud, both of whom would eventually become the two leading commanders of the Afghan mujahideen in the Soviet–Afghan War from 1979. Read more on Wikipedia

Burhanuddin Rabbani was the chairman of the Islamic Unity of Afghanistan Mujahideen and President of Afghanistan from 1992 to 1996. He was a leader in the resistance against the Soviet Union's invasion of Afghanistan.

Among politicians, Burhanuddin Rabbani ranks 715 out of 15,577. Before him are John Zápolya, Rudolf I of Germany, Constantine I of Greece, Henry I of France, Jair Bolsonaro, and Peter I of Serbia. After him are Mahathir Mohamad, Farouk of Egypt, Artemisia I of Caria, Béla IV of Hungary, Hugo Chávez, and Maximilian I Joseph of Bavaria.