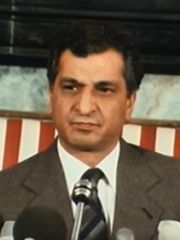 Babrak Karmal (Farsi/Pashto: ببرک کارمل, born Sultan Hussein; 6 January 1929 – 1 or 3 December 1996) was an Afghan revolutionary and politician who was the leader of Afghanistan, serving in the post of General Secretary of the People's Democratic Party of Afghanistan for seven years. Born in Kabul Province into a Tajik family, Karmal attended Kabul University and developed openly leftist views there, having been introduced to Marxism by Mir Akbar Khyber during his imprisonment for activities deemed too radical by the government. He became a founding member of the People's Democratic Party of Afghanistan (PDPA) and eventually became the leader of the Parcham faction when the PDPA split in 1967, with their ideological nemesis being the Khalq faction. Read more on Wikipedia

Babrak Karmal was most famous for his role in the Soviet invasion of Afghanistan in 1979.

Among politicians, Babrak Karmal ranks 1,582 out of 15,577. Before him are Shah Rukh, Ferdinand I of Naples, Zviad Gamsakhurdia, Rudolf IV, Duke of Austria, Kwame Nkrumah, and Æthelwulf, King of Wessex. After him are Gyges of Lydia, Ayşe Sultan, Vallabhbhai Patel, Shalmaneser III, Ismail Ibn Sharif, and James II of Aragon.