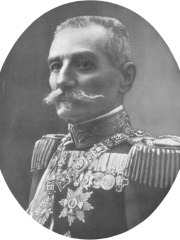 Peter I of Serbia

Peter I (Serbian Cyrillic: Петар I Карађорђевић, romanized: Petar I Кarađorđević; 11 July [O.S. 29 June] 1844 – 16 August 1921) reigned as the last king of Serbia (1903–1918) and as the first king of the Serbs, Croats and Slovenes (1918–1921). Since he was the king of Serbia during a period of great Serbian military success, he was remembered by the Serbian people as King Peter the Liberator, and also as Old King. Peter was Karađorđe's grandson and third son of Persida Nenadović and Prince Alexander Karađorđević, who was forced to abdicate. Read more on Wikipedia

Page views of Peter I of Serbias by language

Among politicians, Peter I of Serbia ranks 842 out of 15,710. Before him are Eleanor of Austria, Childeric III, Anastasios II, Nader Shah, Frederick William, Elector of Brandenburg, and Farouk of Egypt. After him are Nikephoros II Phokas, Ali Pasha of Ioannina, Jadwiga of Poland, Eduard Bernstein, Stanisław Leszczyński, and Julius Nepos.