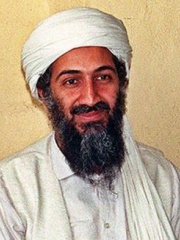 Osama bin Mohammed bin Awad bin Laden (10 March 1957 – 2 May 2011), also transliterated as Usama bin Ladin, was a Saudi Arabian-born militant, mastermind behind the September 11 attacks and founder of the Pan-Islamic militant organization al-Qaeda. The group is designated as a terrorist group by the United Nations Security Council, the North Atlantic Treaty Organization (NATO), the European Union, and various countries. Under bin Laden, al-Qaeda was responsible for the September 11 attacks in the United States and many other mass-casualty attacks worldwide. On 2 May 2011, he was killed by U.S. Read more on Wikipedia

Osama bin Laden was the leader of Al-Qaeda, a terrorist organization that carried out the September 11th attacks on the United States.

Among extremists, Osama bin Laden ranks 6 out of 209. Before him are Jack the Ripper, John Wilkes Booth, Charles Manson, Elizabeth Báthory, and Gavrilo Princip. After him are Ted Bundy, Herostratus, Lee Harvey Oswald, Man in the Iron Mask, Gilles de Rais, and Ted Kaczynski.

Among EXTREMISTS In Saudi Arabia