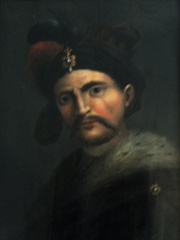 Abbas the Great or Abbas I of Persia or Abbas I of Iran (Persian: شاه عباس بزرگ; 27 January 1571 – 19 January 1629) was the 5th Safavid Shah (king) of Iran, and is generally considered one of the greatest rulers of Iranian history and the Safavid dynasty. He was the third son of Shah Mohammad Khodabanda.Although Abbas would preside over the apex of Safavid Iran's military, political and economic power, he came to the throne during a troubled time for the country. Under the ineffective rule of his father, the country was riven with discord between the different factions of the Qizilbash army, who killed Abbas' mother and elder brother. Read more on Wikipedia

Abbas the Great was a Persian emperor who ruled from 1587 to 1629. He is most famous for his military campaigns against the Ottoman Empire, which he succeeded in conquering.

Page views of Abbas the Greats by language

Among politicians, Abbas the Great ranks 364 out of 15,710. Before him are Philip III of Spain, Francis II, Holy Roman Emperor, Horemheb, Dido, Gustaf VI Adolf of Sweden, and Abdulmejid I. After him are Sargon of Akkad, Joachim Murat, Ertuğrul, Alp Arslan, Sigismund III Vasa, and Semiramis.