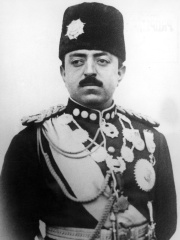 Ghazi Amanullah Khan (Dari: غازی امان الله خان‎, Pashto: غازي امان الله خان‎) was the sovereign of the Kingdom of Afghanistan from 1919 to 1929, first as Emir and after 1926 as King. After the August 1919 end of the Third Anglo-Afghan War, Afghanistan was able to relinquish its protected state status to proclaim independence and pursue an independent foreign policy free from the influence of the United Kingdom.His rule was marked by dramatic political and social change, attempting to modernize Afghanistan on Western designs, which he did not fully succeed in, due to an uprising by Habibullah Kalakani and his followers. On 14 January 1929, Amanullah abdicated and fled to neighbouring British India as the Afghan Civil War began to escalate. Read more on Wikipedia

Among politicians, Amanullah Khan ranks 2,192 out of 15,710. Before him are Louis Philippe I, Duke of Orléans, Necmettin Erbakan, James II of Scotland, Yazid II, Aspar, and Victor Lustig. After him are Albert I, Prince of Monaco, Tarō Asō, Barsine, Mohammad Khodabanda, Fahri Korutürk, and Muhammad Ali Jinnah.