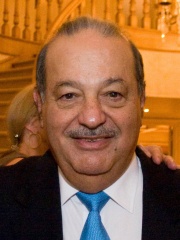 Carlos Slim Helú (Spanish pronunciation: [ˈkaɾlos esˈlim eˈlu]; born 28 January 1940) is a Mexican business magnate, investor, and philanthropist. From 2010 to 2013, Slim was ranked as the richest person in the world by the Forbes business magazine. He derived his fortune from his extensive holdings in a considerable number of Mexican companies through his conglomerate, Grupo Carso. Read more on Wikipedia

Carlos Slim Helú is a Mexican business magnate, investor, and philanthropist. He is the chairman and CEO of Telmex, América Móvil, and Grupo Carso. With a net worth of $77.1 billion as of March 2017, he is the richest person in Mexico and the world.

Among BUSINESSPEOPLE In Mexico

Among businesspeople born in Mexico, Carlos Slim ranks 1. After him are Benito Archundia (1966) and Miguel de Icaza (1972).