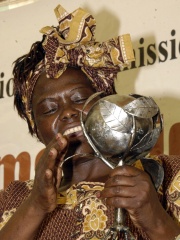 Wangarĩ Muta Maathai (; 1 April 1940 – 25 September 2011) was a Kenyan social, environmental and a political activist and the first African woman to win the Nobel Peace Prize. As a beneficiary of the Kennedy Airlift, she studied in the United States, earning a bachelor's degree from Mount St. Scholastica and a master's degree from the University of Pittsburgh. Read more on Wikipedia

Wangari Maathai is an environmental and political activist from Kenya. She is most famous for her work in planting trees to combat deforestation.

Among politicians, Wangari Maathai ranks 1,030 out of 15,577. Before her are Ivan V of Russia, Nabonidus, Frederick V of the Palatinate, Xiang Yu, Dzhokhar Dudayev, and Harald Bluetooth. After her are Abd el-Krim, Princess Stéphanie of Belgium, Nestor, Trygve Lie, Zeno, and Isabel Martínez de Perón.