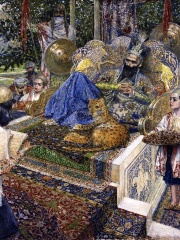 Yamīn-ud-Dawla Abul-Qāṣim Maḥmūd ibn Sebüktegīn (Persian: یمین‌الدوله ابوالقاسم محمود بن سبکتگین; 2 November 971 – 30 April 1030), usually known as Mahmud of Ghazni or Mahmud Ghaznavi (Persian: محمود غزنوی), was the founder of the Turkic Ghaznavid dynasty, ruling from 998 to 1030. At the time of his death, his kingdom had been transformed into an extensive military empire, which extended from northwestern Iran proper to the Punjab in the Indian subcontinent, Khwarazm in Transoxiana, and Makran. Highly Persianized, Mahmud continued the bureaucratic, political, and cultural customs of his predecessors, the Samanids. Read more on Wikipedia

Mahmud of Ghazni is most famous for his military conquests in the Indian subcontinent. He invaded India seventeen times and is known to have taken the Koh-i-Noor diamond, one of the world's largest diamonds, from the Indian ruler Raja Jaya Pala.

Page views of Mahmud of Ghaznis by language

Among politicians, Mahmud of Ghazni ranks 1,247 out of 15,577. Before him are Léon Degrelle, Senusret III, Wanli Emperor, Martti Ahtisaari, Michael II, and Trebonianus Gallus. After him are Ferdinand VI of Spain, Frederick IV of Denmark, Necho II, Ludwig I of Bavaria, Muawiya II, and Sariputta.