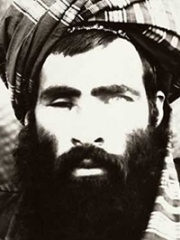 Mullah Muhammad Omar Mujahid (between 1950-62 – 23 April 2013) was an Afghan cleric, Islamist partisan fighter and political leader. He founded the Islamic Emirate of Afghanistan (Taliban) in 1994 and served as its first leader until his death, including as the head of its government from 1996 to 2001. His death, however, remained concealed until July 2015, during which time the Taliban continued to issue statements in his name. Read more on Wikipedia

Mohammed Omar is most famous for being the leader of the Taliban.

Among politicians, Mohammed Omar ranks 1,372 out of 15,577. Before him are Constantine III, Cyrus I, Andronikos I Komnenos, Adnan Menderes, Yang Shangkun, and Jamukha. After him are Gro Harlem Brundtland, Qin Er Shi, Perseus of Macedon, An Lushan, Süleyman Demirel, and Rodolfo Graziani.