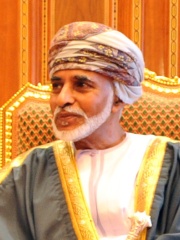 Qaboos bin Said Al Said (Arabic: قابوس بن سعيد آل سعيد, IPA: [qaː.buːs bin sa.ʕiːd ʔaːl sa.ʕiːd]; 18 November 1940 – 10 January 2020) was the Sultan of Oman from 23 July 1970 until his death in 2020. A fifteenth-generation descendant of the founder of the House of Al Busaid, he was the longest-serving leader in the Middle East and Arab world at the time of his death.The only son of Sultan Said bin Taimur of Muscat and Oman, Qaboos was educated in Suffolk, England. After graduating from the Royal Military Academy Sandhurst, he served briefly in the British Army. Read more on Wikipedia

Among politicians, Qaboos bin Said al Said ranks 647 out of 15,710. Before him are Modu Chanyu, Louis Antoine de Saint-Just, Louis the Stammerer, Musa I of Mali, Edvard Beneš, and Karl Liebknecht. After him are Umberto II of Italy, John Adams, Constantine II, Jair Bolsonaro, Halfdan Ragnarsson, and Kliment Voroshilov.

Others born in Oman

Among POLITICIANS In Oman