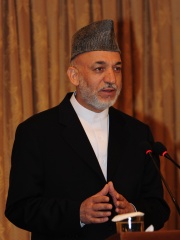 Hamid Karzai (Pashto/Dari: حامد کرزی‎; born 24 December 1957) is an Afghan politician who was the president of Afghanistan from 22 December 2001 to 29 September 2014. He is also the leader of the Popalzai Durrani tribe of Pashtuns. Born in Kandahar, Karzai graduated from Kabul's Habibia High School and later received a master's degree in India in the 1980s. Read more on Wikipedia

Since 2007, the English Wikipedia page of Hamid Karzai has received more than 1,370,609 page views. His biography is available in 82 different languages on Wikipedia making him the 1,044th most popular politician.

Among politicians, Hamid Karzai ranks 1,039 out of 14,801. Before him are Constantine V, Feodor III of Russia, Frederick VII of Denmark, Polycrates, Critias, and Mary, Queen of Hungary. After him are Abd el-Krim, William Jennings Bryan, Quintus Fabius Maximus Verrucosus, Princess Ludovika of Bavaria, János Kádár, and Abu Sufyan ibn Harb.