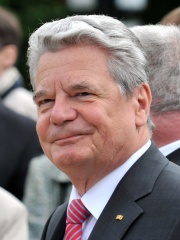 Joachim Wilhelm Gauck (German: [joˈʔaxɪm ˈɡaʊk] (listen); born 24 January 1940) is a German politician and civil rights activist who served as President of Germany from 2012 to 2017. A former Lutheran pastor, he came to prominence as an anti-communist civil rights activist in East Germany.During the Peaceful Revolution in 1989, he was a co-founder of the New Forum opposition movement in East Germany, which contributed to the downfall of the Socialist Unity Party of Germany (SED) and later with two other movements formed the electoral list Alliance 90. In 1990 he was a member of the only freely elected East German People's Chamber in the Alliance 90/The Greens faction. Read more on Wikipedia

Among politicians, Joachim Gauck ranks 1,018 out of 15,710. Before him are Jean-Bédel Bokassa, Nabonidus, B. R. Ambedkar, John I of Portugal, Hamid Karzai, and Yazdegerd III. After him are James Madison, Shaka, Sebastian of Portugal, Mohammad Mosaddegh, Cleopatra Selene II, and Édouard Daladier.