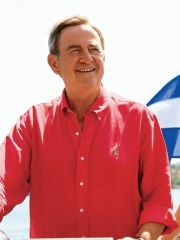 Constantine II (Greek: Κωνσταντίνος Βʹ, Konstantínos II, pronounced [ˌkonstanˈdinos]; born 2 June 1940) reigned as the King of Greece from 6 March 1964 until the abolition of the monarchy on 1 June 1973. He acceded as king following the death of his father King Paul in March 1964. Later that year he married Princess Anne-Marie of Denmark with whom he eventually had five children. Read more on Wikipedia

Since 2007, the English Wikipedia page of Constantine II of Greece has received more than 2,023,821 page views. His biography is available in 54 different languages on Wikipedia making him the 635th most popular politician.

Page views of Constantine II of Greeces by language

Among politicians, Constantine II of Greece ranks 630 out of 14,801. Before him are Thutmose I, Ptolemy XIII Theos Philopator, Karl Liebknecht, Umberto I of Italy, Yazid I, and Edmund Burke. After him are Reuven Rivlin, Robert Gascoyne-Cecil, 3rd Marquess of Salisbury, Henry V of England, Olaf Tryggvason, Charles IX of Sweden, and António Guterres.