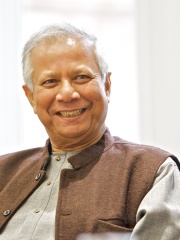 Muhammad Yunus (born 28 June 1940) is a Bangladeshi social entrepreneur, banker, economist, and civil society leader who was awarded the Nobel Peace Prize for founding the Grameen Bank and pioneering the concepts of microcredit and microfinance. These loans are given to entrepreneurs too poor to qualify for traditional bank loans. In 2006, Yunus and the Grameen Bank were jointly awarded the Nobel Peace Prize "for their efforts through microcredit to create economic and social development from below". Read more on Wikipedia

Since 2007, the English Wikipedia page of Muhammad Yunus has received more than 1,706,426 page views. His biography is available in 85 different languages on Wikipedia making him the 18th most popular businessperson.

Among BUSINESSPEOPLE In Bangladesh