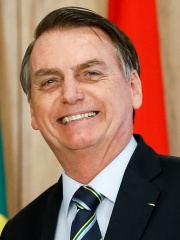 Jair Messias Bolsonaro (Brazilian Portuguese: [ʒaˈiʁ meˈsi.ɐz bowsoˈnaɾu, ʒaˈiɾ -]; born 21 March 1955) is a Brazilian politician and retired military officer who has been the 38th president of Brazil since 1 January 2019. He was elected in 2018 as a member of the conservative Social Liberal Party before cutting ties with it. Read more on Wikipedia

Among politicians, Jair Bolsonaro ranks 713 out of 15,577. Before him are Françoise-Athénaïs de Rochechouart, Marquise de Montespan, John of Bohemia, John Zápolya, Rudolf I of Germany, Constantine I of Greece, and Henry I of France. After him are Peter I of Serbia, Burhanuddin Rabbani, Mahathir Mohamad, Farouk of Egypt, Artemisia I of Caria, and Béla IV of Hungary.