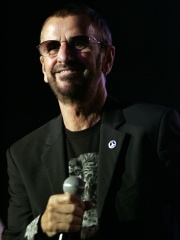 Sir Richard Starkey (born 7 July 1940), known professionally as Ringo Starr, is an English musician, singer, songwriter and actor who achieved international fame as the drummer for the Beatles. Starr occasionally sang lead vocals with the group, usually for one song on each album, including "Yellow Submarine" and "With a Little Help from My Friends". Read more on Wikipedia

Ringo Starr is most famous for being a member of the Beatles, as well as his solo career.

Among musicians, Ringo Starr ranks 23 out of 2,662. Before him are Ray Charles, Brian May, Jean-Michel Jarre, Charlie Watts, George Harrison, and Władysław Szpilman. After him are Arthur Rubinstein, Mark Knopfler, Eric Clapton, Keith Richards, Scatman John, and Bon Scott.

Among people born in 1940, Ringo Starr ranks 10. Before him are John Lennon, Margrethe II of Denmark, Nursultan Nazarbayev, Chuck Norris, Constantine II of Greece, and Saparmurat Niyazov. After him are Michael Gambon, Bartholomew I of Constantinople, Burhanuddin Rabbani, Frank Zappa, Carlos Slim, and Muhammad Yunus.